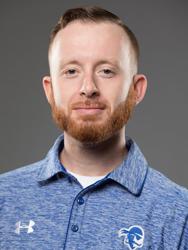 Previous Volleyball Experience: 5 years as a college coach. From DI, DIII, and NAIA at Elmira College, Southwestern College and Currently at Seton Hall

BIO: Chris Weathers returned to the Pirates for the first time since graduating from Seton Hall in 2013.  For four years, he was a volunteer women’s volleyball manager under Yaeger.  Weathers returns to Seton Hall after serving a year as a graduate assistant volleyball coach at Elmira College where he assisted the head coach with daily operations including scheduling, practice implementation and recruiting.

Coach Weathers was also a graduate assistant coach at Southwestern College for two seasons while earning his master’s degree in Business Administration.

Get to Know Your Coach

How would you describe your coaching style?

What is your favorite characteristic in a player

My favorite characteristic in a player is determination. I like to watch athletes strive to achieve their goals, during a match or practice, and enjoy the pure satisfaction of accomplishing them. I enjoy coaching athletes who do not stop at a sign of failure and have the ability to turn on perseverance.

Who are the people that have influenced you most as a coach?

The people that have influenced myself the most as a coach are my past coaches and athletes. I like to consider myself a sponge and learn from every coaching/playing experience I have.

What do you enjoy doing when you’re not in coaching mode?

I enjoy being in the kitchen (cooking or baking), traveling the world, and listening to music.

What’s your favorite thing about volleyball?

The shift in emotion/energy during matches is one of my favorite aspects of the sport. I believe that volleyball is 40% physical/60% mental and have watched teams make a dramatic comeback after stealing the energy from the other side of the court. It is truly